How To Get Started Hacking Django Based Applications

Django is a python based web framework. In this writeup, i will teach you how to analyze django based applications . For this writeup, i will be using wagtail for examples. When doing static code analysis, for me , the most important part is identifying how routes are registered and handled, that is what we will cover in this writeup.

Before we start, i recommend you having visual studio code, since it is lightweight and its easy to analyze code using it, you can just use ctrl+click on functions to follow their definitions which helps alot. But, you can still use an editor of your choice if you want.

All django applications has a file called urls.py. This file contains all the url endpoint available in the application. There are 3 function that allows us to register our endpoints, path, re_path, and url. path is the main way to register endpoints. re_path is like path but support regex. url is just a reskin of re_path. Lets take a look at wagtail for example. 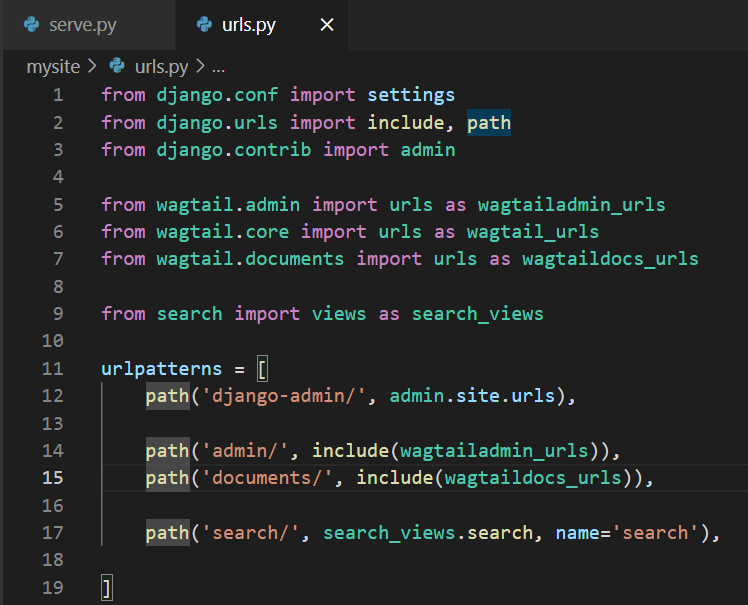 Here, you can see that 4 endpoints are registered using the path function. The second argument is the callback function that will be called when that endpoint is accessed. In line 17, when we access the search/ endpoint, it will call the search_views.search function. The name argument is not that important. Alternatively, we can also provide another list of endpoints in the second argument, like what is done in line 12, 14, and 15. In line 14 for example, it includes wagtailadmin_urls 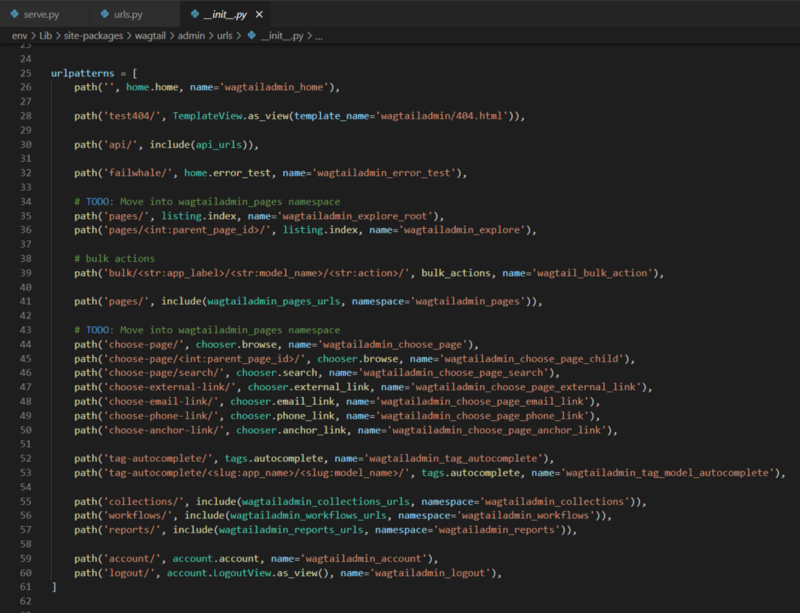 Now if we access for example admin/account/ it will call the account.account function as seen in line 59.

There are times where we need certain parts of the url as a variable, just like in line 39, in this case, the variables will be passed as an argument to the function to be called. If you follow the bulk_actions function, you will see this.

The first argument is always the request, and the second, third, and fourth argument is the variable from the url path.

This is by far the most confusing part for me. But, i will try to make it as simple as possible.

There are times where you see this in the callback.

This means, that it is using a class based view. In the django, there has a class called View. According to the django documentation, this is the flowchart of the View class 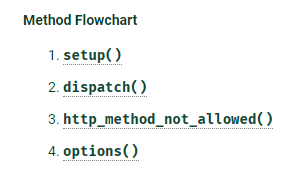 The setup is the setup, not that important for us, the dispatch, is the function that actually handles the request. By default, it checks the method of the request, check if it is in the http_method_names variable, and call the associated function to the method. For example, if the http method is post, it will call the post function. The http_method_not_allowed is self explanatory, and the options function handle the request if the http method is option. This View class is supposed to be inherited by other class

So when the LoginView.as_view function is called, the dispatch function from the View class will be called. It will check the http method and execute the corresponding function depending on the http method.

Lets take another View class as an example.

Here, it uses the class TemplateView. 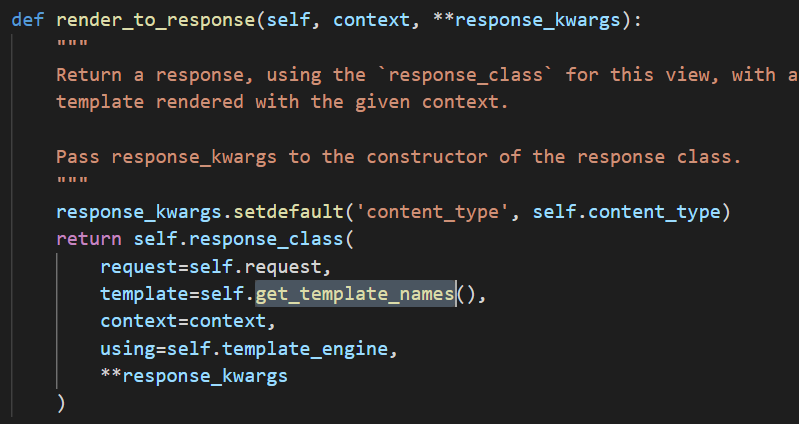 As you remember, we set the value of this template_name when routing the endpoint.

Class based view is really confusing so i’ll add another example, you can skip to the next part if you want.

In the BaseWorkflowFormView, you can see that it overrides the dispatch function. 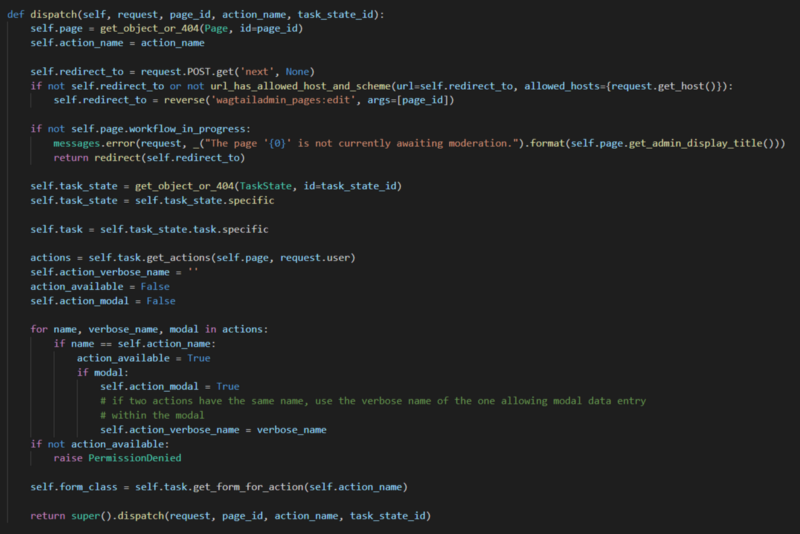 I wont go to what it does but in the end of the dispatch, you can see that it calls the original dispatch method of the super class, which is the View class to continue the flow of the original View Class. Like before, the dispatch method in the View class checks the http method, and call the corresponding function. You can see in BaseWorkflowFormView that it has both get and post function,

but the post function is overridden by WorkflowAction when that class inherits BaseWorkflowFormView so this post method is called instead when the http method is post.

In django, pages are often times rendered using templates. We will use the tags/ as an example.

Here, it uses the class TemplateTagIndexView

which inherits TemplateView. We already talked about TemplateView above. So, we know that TemplateView has a get function, which renders the template with a context provided by get_context_data. 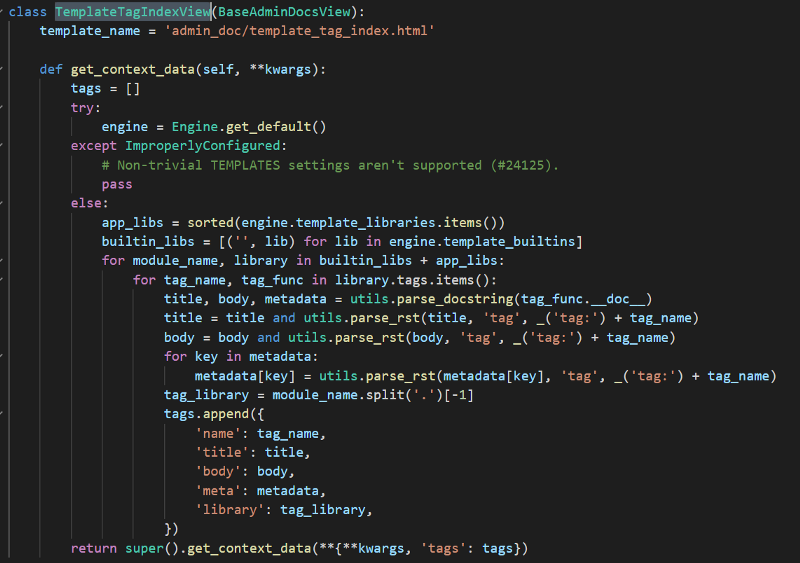 You can see that it makes a new dictionary called tags, and add it to the original get_context_data. This variables are then used when rendering the template.

This is the end of the writeup, by now, you should know how a django application operates and how to test it. Normally, i made these writeups as a reference for myself when i want to tackle django hacking again, but i decided to publish it. Thanks for reading.

While reading the code of bookwyrm, i encounter this endpoint This endpoint calls the function views.upload_cover. You can see that it accepts a post request from the decorator above, and it requ...

INTRODUCTION Django-markdownx is a famous markdown library for python. According to github, it is used by 1.6k projects, on githubs, that doesnt include closed source projects and websites. In th...

INTRODUCTION Changedetection.io is a famous open source self hosted website change detection monitoring and notification service with over 4k github stars and over 1m+ docker pull. In this writeup,...

2FA bypass by reading the documentation