Recently, i’ve been practicing game hacking frida. Frida is an excellent tool for hacking. It allows us to make scripts in javascript, and is very flexible, a script, we made can be run on any architecture. Making it great for android game hacking. But there is one problem i encountered often. Games are compiled in mono and i dont know how to hack mono games and there is almost no resource about it except for the documentation. Mono games works differently than native games. So, i decided to make a writeup about it after hours of reading the documentation and reading the source code. Lets get started.

Before we start, make sure you have an ide and frida installed. The game plan on hacking mono games is simple. Here is a diagram i made summarizing it.

First, we will get the mono library which we will use. Then, we will need to set our thread to the root domain. So when we later compile functions using mono_compile_method (we will talk about this later.), it will work. Next, we will get all the assemblies. Assemblies are the inidividual dll’s that are loaded by the mono library. 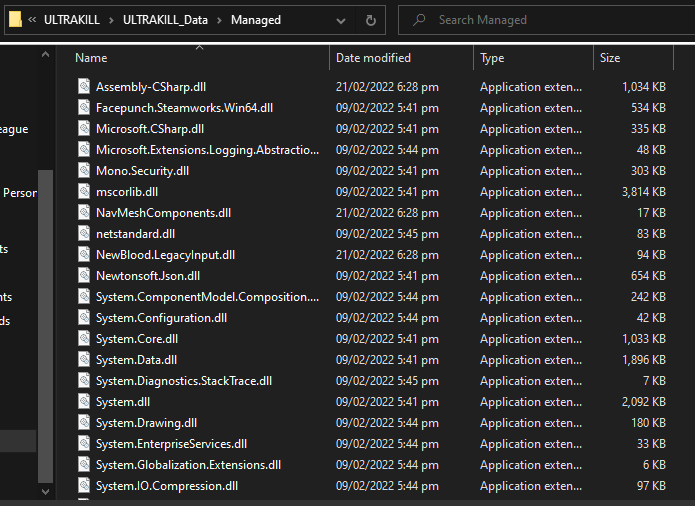 For this writeup, i will be hacking ultrakill once again since i already worked with it before and know its classes and functions already. First, we will get the mono library. In ultrakill, the mono library is named mono-2.0-bdwgc.dll. We can get it using getModuleByName which will give us a module object.

Here, i made a new function, GetAssemblyCsharpCallback, the first argument is the Mono Assembly Object. It will get the name of the Assembly using mono_assembly_get_name, and if it is equals to Assembly-CSharp, set our AssemblyCsharpAssembly variable to the image of it. AssemblyCsharp contains all the game logic. Next, we are gonna get our target class on it, the NewMovement class. 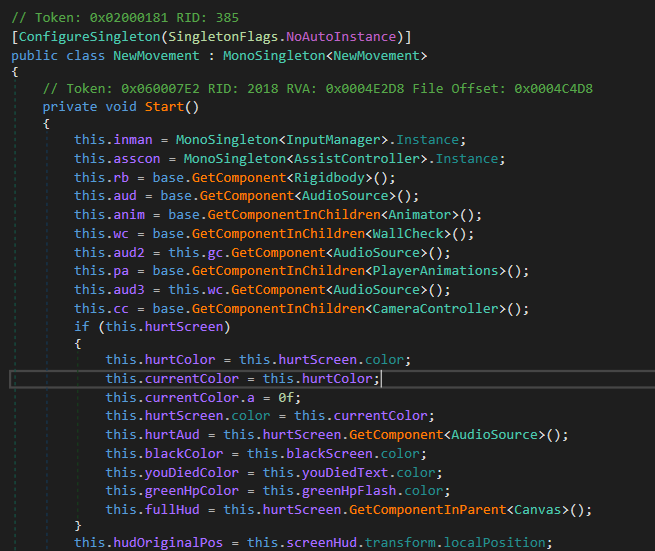 This is the class of our player. We will use mono_class_from_name to get our Mono class object

The mono_class_from_name takes 3 parameter, the first is the Assembly image, the next is the namespace, and the last is the name of the class. It accepts the second and third parameter as const char*, so we will use Memory.allocUtf8String, to alloc a const char to memory, and return a pointer to it. Now, we will get the Update method. we can do that with the function mono_class_get_method_from_name. It will return a mono method object, then we will pass it to mono_compile_method to get it’s address

mono_class_get_method_from_name accepts 3 parameter, the first is the Mono Class object, the second is the name of the function, and the third is the number of parameters of the function. Then, we passed the Mono Method Object to mono_compile_method. Now that we have those, we can start making a hack

Now that we know how to get the address of the functions, we can now make our hack. To demonstrate the power of frida, i will be showing you three of the most important aspect of game hacking, memory manipulation, function hooking, and function calling

First, we will hook the update method to get our player object. Class methods always pass the object instance as the first variable, so we can get our NewMovement instance in the first argument of the Update method. We can do that in frida, using Interceptor

Now we have the LocalPlayer instance

Now that we have the local player. Now, we will manipulate its data. Specifically, the hp field. To get the offset of a field. We will use mono_class_get_field_from_name to get the Mono field object and mono_field_get_offset to get its offset

Now for function calling, lets call the jump function. To get the address of it, we will use again mono_class_get_method_from_name and mono_compile_method. For this example, we will get rid of the ManipulateHealth method and instead, call the SuperCharge function.

As you can see, frida is a powerful tool. The hardest part of this is learning and understanding the documentation. I hope this writeup will be a guide to future hackers that are also finding problems in hacking mono games. Thanks for reading.