I Started up by downloading the firmware in the official site of dlink https://www.dlink.com.ph/dir-615/ . I downloaded the second firmware instead of the first since the first is the latest and is probably more secured. The file is a rar file, i simply unrar it and ran binwalk on it. And i managed to get the linux file system

finding httpdAnd i found this file in the /sbin directory. Now time for reverse engineering

system callThe _system is like a mixture of sprintf and system. It mixes string formatting and system into a one function. Upon looking more into the disassembly

We can see that the _system takes 3 arguments, in the register $a0, $a1 and $a2. We can see that in the first argument($a0), it takes a string that is equal to fwqd -i %s -u %s , *this is the code that will be executed by the *_system. We can see in the string that it has two %s and like i said, _system is like sprintf and system combined into one function so this string will be used for string formatting 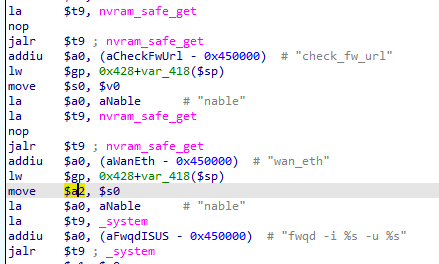 With those all parameters we have, we can now assume that the _system call is equal to _system(“fwqd -i %s -u %s”,nvram_safe_get(“wan_eth”),nvram_safe_get(“check_fw_url”)).

You see, even if we cant confirm the code injection bug, i found a cve similar to it. After searching the string check_fw_url in google, it gives me a link to CVE-2019–13561 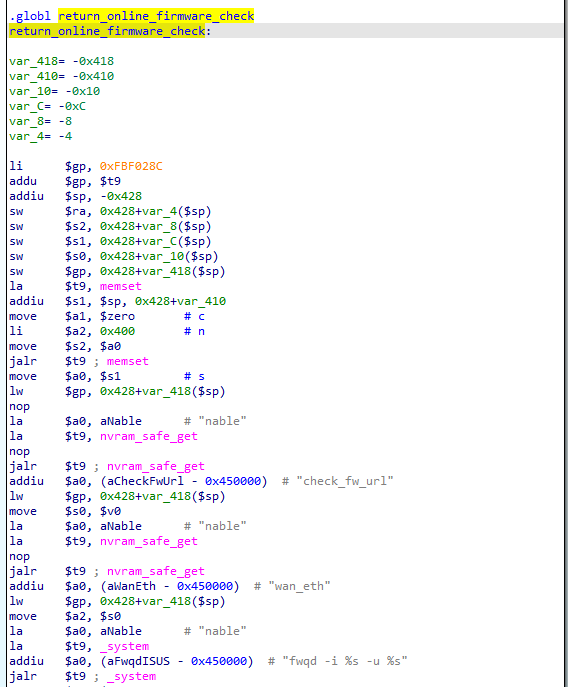 And the vulnerable variable that we are inspecting is the check_fw_url which matches in his cve. I guess the online_firmware_check.cgi is just a simple cgi script that calls the function return_online_firmware_check. Again, i cant confirm it since i dont have the dir-615 with me.

And there you have it, my writeup of a potential code injection vulnerability in the dlink dir-615/analysis of the cve 2019–13561. I found this bug in the 2009 version of the firmware of dir-615 so as long as your firmware is updated, you should be safe from it. Thanks for reading.

PS. I assumed that what nvram_safe_get is doing is getting the value of a variable from nvram because it is close to the function nvram_get which get the value of the string you provide to it from the nvram. You can see it in this writeup. https://elongl.github.io/exploitation/2021/05/30/pwning-home-router.html . Thanks again for reading.

Hi. This is my second writeup on my hacking the dlink dir-615 series as i try to get my first cve. I found more vulns and will also make a writeup on it soon so stay tuned. So lets get started I s...

Hi. This is another writeup of my hacking the dlink series. This series is just me trying to find my first cve. So let get started While going through all functions that accept user input, i found...