This is my writeup on the Alex Fan Club challenge. I will show how i solved it all the way from the beginning. Lets start

In the challenge, you can see that we are given a txt file and the vulnerable website. So i downloaded the zip file and visited the website. 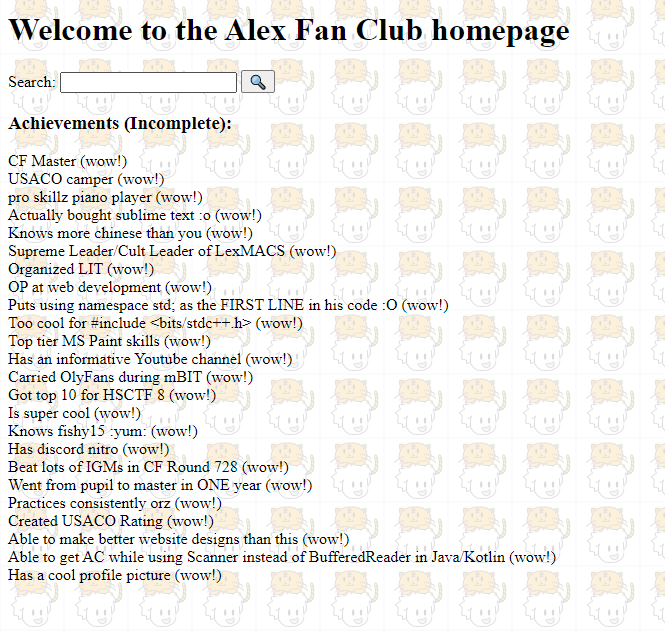 The website has a search field. A common vulnerability on search functionality is sqli so i tested it out by giving ‘

And it gives us 500 meaning its vulnerable. Now i tried the normal ORDER BY sqli with a comment but it gave me this

One of my main problem is how can i inject comments since — is blocked and also /**/ and sqlite dont allow # as comment, i dont know what to do. So i asked in our discord server and someone has a really smart idea

Instead of comments, we will just complete the query so it is not invalid. So what i did is open up a sqlite playground in https://sqliteonline.com/ and tried to replicate the query of the challenge

https://github.com/swisskyrepo/PayloadsAllTheThings/blob/master/SQL%20Injection/SQLite%20Injection.md. I followed this cheat sheet and tried the extracting sqlite version with a union select 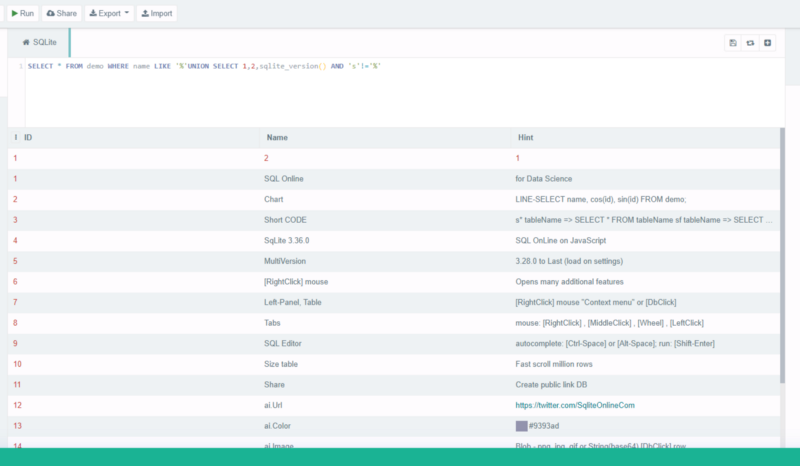 This is the query that i came up with. I tried it in the server. Before that, we should know that in the challenge, there is only one column so we have to reduce our columns in the query

And space it blacklisted. It doesnt work. After playing with it for a while, i found out that we can use tabs and new line instead of space. It took me awhile to find that out. Tabs is easier so i used it

Now, to dump the tables, we will just follow the cheatsheet. So i used the payload asdasd’ UNION SELECT tbl_name FROM sqlite_master WHERE type=’table’ and tbl_name NOT like ‘sqlite_ I replaced all spaces with tabs. And it works

Now we know that there is a table called flag_is_in_here. Next up is extracting columns. Again, we followed the cheatsheet for that. The query that i come up is asd’ UNION SELECT sql FROM sqlite_master WHERE type!=’meta’ AND sql NOT NULL AND name =’flag_is_in_here’ AND ‘1’!=’ You can see in the end, i added ‘1’!=’ It is because there is still a leftover %’ from our query when we injected to it and this will get rid of it. So i tried it up and it worked

So now we know that there is a column called flag_column. Now to extract the value of it, i used the query asdasd’ UNION SELECT flag_column from flag_is_in_here WHERE flag_column like’. I tried it out and it worked

We got the flag.

Our team, noobzUnited, ranked 36 in the ctf. It is a hard ctf but fun. Thanks for reading

Hi. In this writeup, i will show you a sqli that i found in harvard and also, a xss as a bonus While looking through the subdomains of harvard, i found this one interesting subdomain https://sched...

Csaw18 — get it : Buffer overflow to redirect the return flow

In this writeup, we will be solving the csaw18 get it challenge. Here, we will overwrite the return address to redirect the flow of the program to any function we want. Lets start First i opened u...

Hi. This is the third writeup on my buffer overflow series. In this writeup, we will exploit buffer overflow and achieve remote code execution with shellcodes. Here, we will slightly use a debugger...

Broken Access control bug : Bypassing 403’s by finding another endpoint that do the same thing.